The Oregon Board of Forestry decides how our State Forests are managed on behalf of Oregonians. It is composed of seven members of the public.  No more than three can receive significant income from the timber industry.  The other four must not have any interest that interferes with their representing the public interest 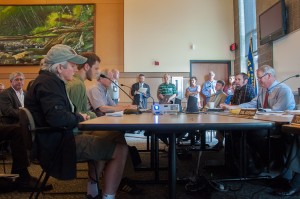 Conservationists testifying at a Board of Forestry meeting

On November 5th, the Board hesitantly agreed to explore a new paradigm for managing the Tillamook & Clatsop state forests. Currently, most of the forest is managed in phases of timber harvest and habitat growth so that a “mosaic of forest types moves across the landscape and over time.” Under a zoned approach, areas of the forest would be designated to emphasize logging and areas would be designated for conservation.

It is unclear that this approach will solve ODF’s financial needs and improve conservation outcomes on the forest. The devil is in the details, and only time will tell if this is a feasible pursuit.

On June 5th, the Board of Forestry unanimously affirmed a new state forest land classification called “High Value Conservation Areas.” The areas affected by the new rule include aquatic, riparian and wildlife habitats, as well as lands with specific plant communities or those with unique aesthetic value. State Forestry will bring forward new maps of the High Value Conservation Areas early next year.

The North Coast State Forest Coalition has been involved in creating unprecedented Conservation Areas on the Tillamook and Clatsop state forests for several years and we are glad to see the new classification finalized after a long process–a process that saw overwhelming public support for protection for fish and wildlife habitat, clean drinking water sources, and recreation areas.

Board Chair Tom Imeson conveyed Governor Kitzhaber’s “thanks” to all those involved in the Conservation Area process, including the thousands of Coalition supporters who attended hearings, submitted comments, and have been active in our effort.

Unfortunately, the Board did not make clear that these areas would be protected long-term despite over 2,000 public comments that specifically called for durability. As the Department of Forestry struggles under budget constraints, the new classification areas are at risk. The Board deliberated whether or not to set aside High Value Conservation Areas while exploring the opportunity for financial viability through new forest management plans. The idea to set the areas aside was discussed but ultimately dismissed. Instead, the Board might consider reopening these areas for timber harvest.

Chair Imeson reminded everyone that the areas affected by the new rule were now the “status quo,” and he called for even more conservation to be sought as forest plan changes are considered. The Coalition will be closely tracking the Board as it examines alternative management plans that aim to secure better environmental protections and more revenue from the timber harvest. We are skeptical that these two goals can both be achieved. The Board’s commitment to upholding long-term environmental health on these forests will be tested and we hope they are up for the challenge.

On November 7th, the Oregon Board of Forestry voted unanimously to move forward a new “High Value Conservation Area” designation. The vote follows an outpouring of support for the conservation area approach at the July BOF meeting in Tillamook.

The new conservation designation follows a controversial change to state forest management in 2009, in which the Board dramatically increased targets for clear-cutting and lowered targets for older forest.

Now, however, the Board is acting to affirma a more balanced approach to state forests by clarifying and highlighting conservation strategies that protect clean water, avoid landslide, and conserve older forests.

New images based on the Department of Forestry models show the contrast between special conservation areas likely to get some protection in the new conservation area category versus the timber-first plan endorsed by some county commissioners and legislators.

The draft rule revisions can be found here.

The next step in the rule-making process will include a public comment period.

The Oregon Board of Forestry met in Tillamook on July 26 to consider a Department of Forestry proposal for a new legal category of environmental protection, “high value conservation areas.”   Approximately 100 conservation advocates, mostly from Tillamook and Clatsop County, created an overflow crowd.

All of the testimony was in favor of the department proposal, including three commissioners from Clatsop County and one from Washington County.  Only one person spoke in opposition.  Four board members voted in favor of the proposal, while the two board members who are employed by the timber industry voted against the new approach.

The Daily Astorian had an excellent article that captured the flavor of the meeting.  OPB had good coverage as well.

The Astorian also supported the decision in an editorial.

Forestry staff will now produce a more specific recommendation on how to define and apply the new legal category, and they will return to the Board with that information in November.