This report was written by Joan Cutuly

On June 26, the Rockaway Beach Citizens for Watershed Protection co-sponsored a forest management and ecology tour with Oregon Wild and North Coast State Forest Coalition. The purpose of the tour was to learn how different types of forest management and ownership affect our environment, economy, and public health.

The tour began with a walk along the salt water marsh bordering Nedonna Beach, just north of Rockaway Beach. From the marsh’s edge, the group looked east across Highway 101 at the hills of privately owned forest that has been recently clear cut along Jetty Creek. From that vantage point, it was pointed out the reasons why avoiding that kind of intensive logging is in the best interest of the land and all living things.

From a panoramic viewpoint, it was possible to see how the consequences of stripping a hillside of trees would travel all the way to the sea. As water runs downhill without trees to soak it up, that runoff finds its way into creek beds, muddying drinking water not only through soil erosion but with toxins from herbicide and rodenticides sprayed on the clear cut to keep down the competition following replanting.

For decades, logging has been a source of livelihood and pride here in the Pacific Northwest. But what might we be exchanging for the quick and easy industrial removal of trees? Long before this region became the logging center of the country, Henry Thoreau wrote: “The cost of a thing is the amount of…life which is required to be exchanged for it, immediately or in the long run.” 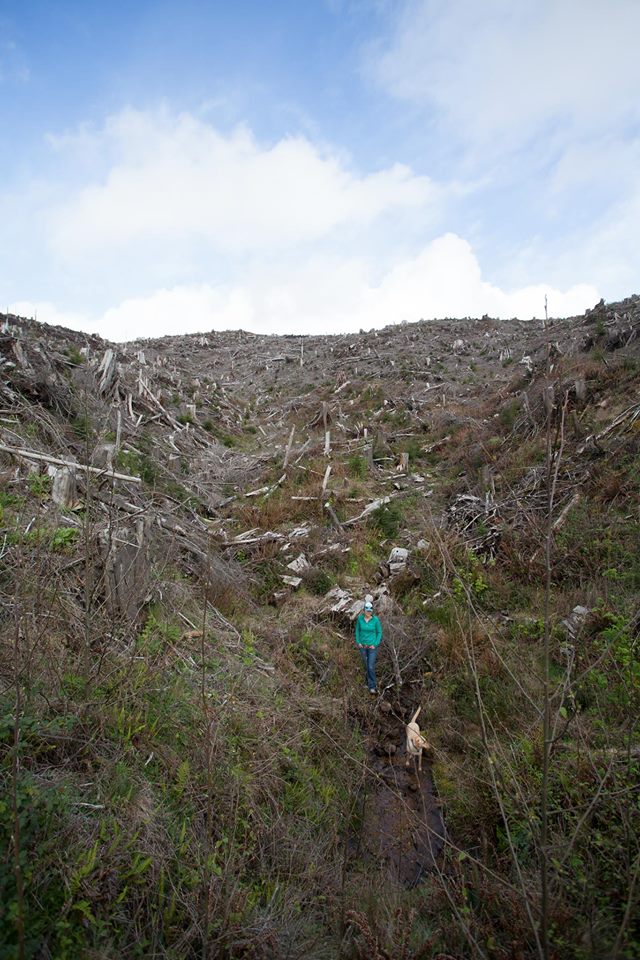 The cost of clear cutting is dear and grave and often masked by a buffer of trees that hides the clear cut from public scrutiny and even from our awareness. As we could see from the beach, any run off from the Jetty Creek clear cut is destined by the laws of physics to find its way into the Jetty Creek drinking water source—not only muddying the water from soil erosion but bringing with it contaminants from the common practice of aerial spraying supported by Oregon law. Human residents are not the only inhabitants affected as the unhealthy water flows across Highway 101 into Nedonna Marsh—a marsh that is a spawning ground for Coho, as well as a habitat for heron, eagles, osprey, ducks, river otters, seals, and many species of song birds. The area is also a fishing and recreational paradise for locals and visitors.

Erosion is not the only threat to the land, as development threatens to affect the mossy woods, rich with flora and trails that many people share with the birds and other wildlife.

What are the costs that come with the profits to be made by clear cutting and insensitive development? The answer came on the second half of the tour. Just south of Cannon Beach, the group hiked into a section of forest that has been given the opportunity to regenerate itself. Such a forest exemplifies all that is to be gained in preserving our forests through sustainable management. Perhaps most importantly, a forest such as this serves as a giant collector of carbon that can operate on the first line of defense in our battle against global warming.

Maintaining a diverse forest canopy significantly lowers stream temperatures, a key to protecting salmon, known as an indicator species here in the Pacific Northwest. As the salmon population goes, so goes the health of the environment. Gone are the days when salmon ran so thick a person could walk across a stream on their backs. We asked too much of the salmon who now in their own way are warning us that a culture that supports laws permitting the stripping, poisoning, and exploitation of the land is ensuring its own decline.

By contrast, an old forest that is rich with loamy soil tells the story and understory of a healthy culture. In such a forest, we experience the life-giving force and the diversity of flora and fauna which is in direct contrast to the stark monoculture of a managed forest that is cut every fifty years and managed with chemicals. “In wildness,” wrote Thoreau, “is the preservation of the world.” 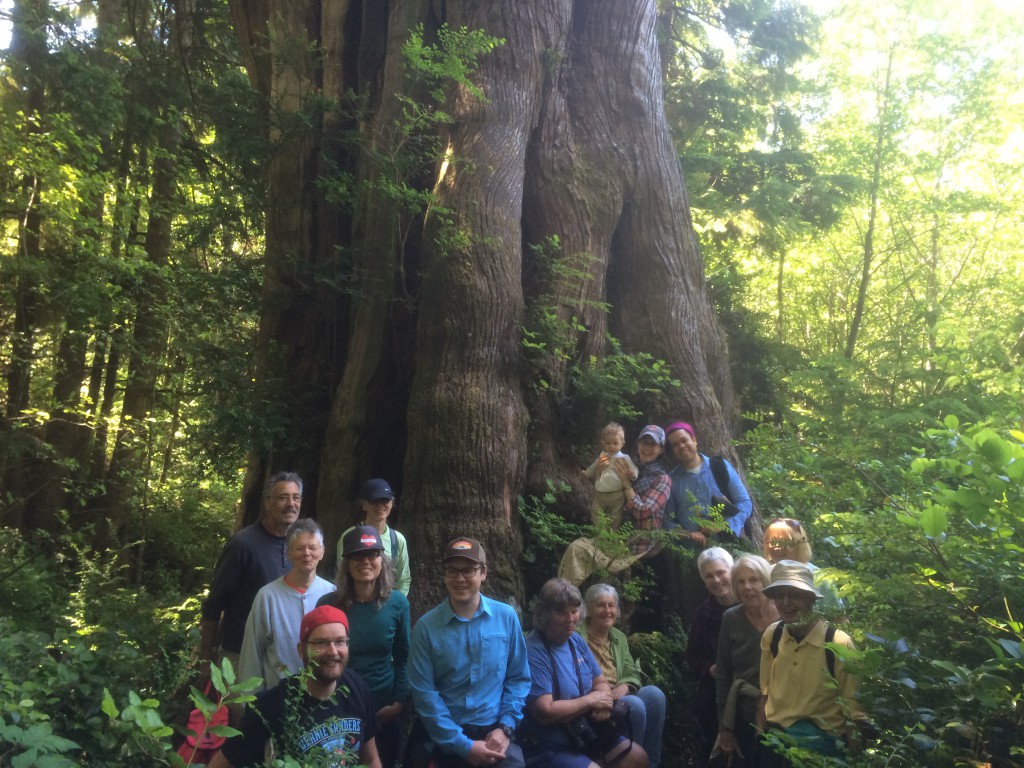 The tour group had lunch sitting on the roots of Oregon’s largest tree—a cedar as old as eight-hundred years. The Old One knew the wild that existed before Columbus and was towering toward the sky long before the birth of our Constitution. Such a tree reminds us of all the damage it has been possible for us to do in the short lifespan of our industrialized culture. And it asks us to contemplate whether the economic benefits of such a culture are worth the cost to the health of our environment and all living creatures. It also asks who we will become as a people if we continue to live by laws that enable the abuse of the land that sustains us.